I saw a Trump campaign ad featuring Andrew Pollack tonight. If you’re unaware, Pollack is the father of 18-year-old Meadow Pollack, a victim of the Parkland school shooting. In this ad Pollack mentions his daughter, as a picture of her appears on screen and talks about how she died. He goes on to blame Obama’s “restorative justice policies.” 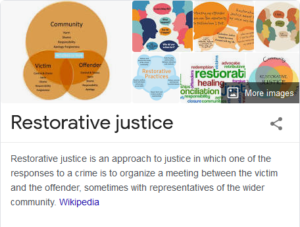 I don’t believe that Mr. Pollack understands what restorative justice is.

This is simply untrue.

The offender in the Parkland shooting had no criminal record, but had many complaints against him that fell through the cracks because the school system and the Sheriff’s department didn’t have the time or the resources to evaluate and act on this young man’s mental health.

That’s not an excuse. He committed an atrocity, and, in my opinion, he deserves the death penalty. But all this loss of life could have been prevented.

Not with gun laws.

Not with more cops.

NOT with metal detectors and armed guards in the schools.

With trained professionals to handle and defuse difficult situations BEFORE a gunman shows up at a school.

Final Report of the Federal Commission on School Safety

Interesting that Trump threw, and continues to throw, his predecessor under the bus but he spent nine months coming to the same conclusion.

Maybe that money could have been better spent on applying what we already knew to help the schools.

This website uses cookies to improve your experience while you navigate through the website. Out of these cookies, the cookies that are categorized as necessary are stored on your browser as they are essential for the working of basic functionalities of the website. We also use third-party cookies that help us analyze and understand how you use this website. These cookies will be stored in your browser only with your consent. You also have the option to opt-out of these cookies. But opting out of some of these cookies may have an effect on your browsing experience.
NecessaryAlways Enabled
Necessary cookies are absolutely essential for the website to function properly. This category only includes cookies that ensures basic functionalities and security features of the website. These cookies do not store any personal information.
Non-necessary
Any cookies that may not be particularly necessary for the website to function and is used specifically to collect user personal data via analytics, ads, other embedded contents are termed as non-necessary cookies. It is mandatory to procure user consent prior to running these cookies on your website.
SAVE & ACCEPT
WP Twitter Auto Publish Powered By : XYZScripts.com