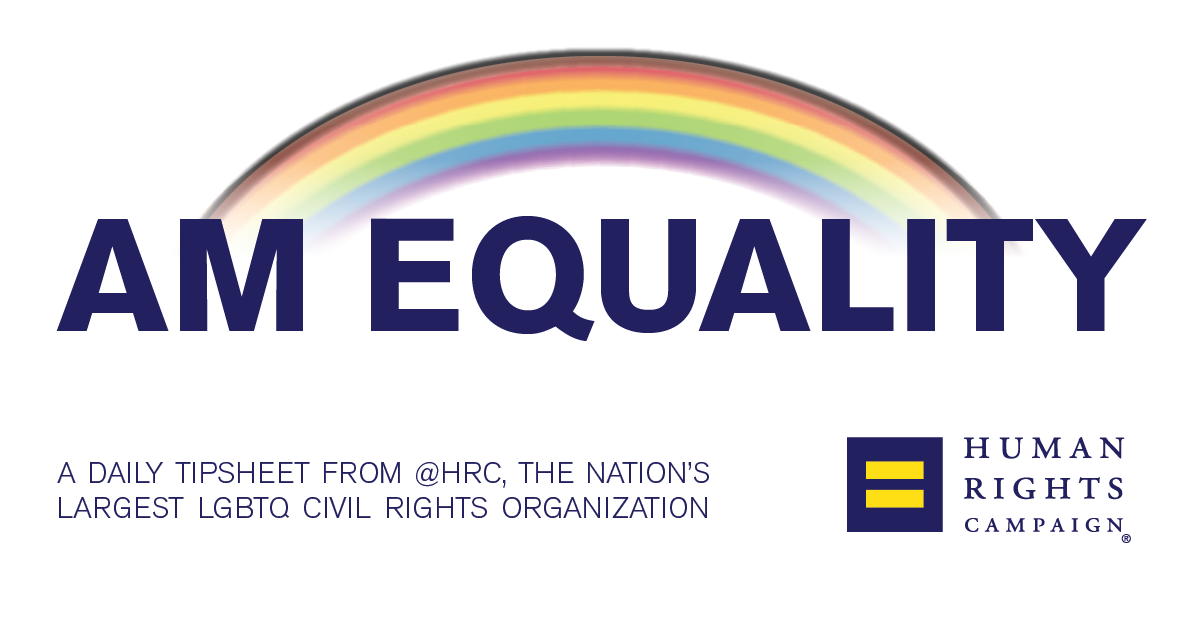 MISSISSIPPI WEDDING VENUE OWNER REFUSES SERVICE TO COUPLE — SAYING THEY REFUSE TO DO INTERRACIAL OR SAME-SEX WEDDINGS: After being refused service by Boone’s Camp Event Hall, LaKambria Welch, the sibling of the groom, a Black man marrying a white woman, uploaded a video of the interaction to Facebook. More from The Root.

The conduct in this video is illegal. A reminder that battles won long ago are being reignited. And when we have judges who are unwilling to affirm that Brown v Bd was correctly decided, these refusals of service & assaults on dignity must be met head on.

TUESDAY TWEET — CRAZY EX-GIRFRIEND’s STAR AND LGBTQ ALLY GABRIELLE RUIZ GIVES POWERFUL REMARKS ON LOVE AND ACCEPTANCE: “As Americans, we share bedrock identities. Equality is our birthright,” said Ruiz (@gabrielleruiz) at the 2019 HRC San Diego Dinner. “It is not a privilege given. It is never conditioned by the person we love or our gender identity, and it cannot and will not be taken away.” More from HRC

During the @HRC San Diego Dinner, @CW_CrazyXGF star and LGBTQ ally @gabrielleruiz gave powerful remarks on love, acceptance and how we are all created equal. pic.twitter.com/UbC1SqgXin

SAVE THE DATE FOR “JAZZ & FRIENDS” 2020: HRC Foundation’s annual Jazz & Friends National Day of School and Community Readings will be held on Thursday, February 27, 2020. More from HRC.

WHEN WILL THIS ONGOING EPIDEMIC END? — TEXAS SHOOTING LEAVES 7 DEAD AND AT LEAST 21 INJURED IN ODESSA AND MIDLAND, TX.: More from The New York Times.

We are heartbroken to learn about the shootings that took at least five lives and injured many others in Midland and Odessa today.

Our elected officials must take action in the wake of this senseless tragedy and finally pass common-sense gun violence prevention measures. https://t.co/KpUfGtAkPz

KENTUCKY HIGH SCHOOL STUDENTS TOLD TO REMOVE T-SHIRTS CELEBRATING LGBTQ COMMUNITY: “We asked why we can’t wear shirts that express our sexuality, ” said Lilly Vance,  one of the high school students that were asked to change their t-shirts. “Our principal basically told us that we can’t wear these clothes because they cause a distraction from learning and that they’re controversial.” More from Courier-Journal.

SACRAMENTO LGBTQ CENTER TO RECEIVE FUNDING FROM CITY COUNCIL FOR PERMANENT HOME: “The LGBT community is still an underserved community and it’s important that they can continue to provide health and wellness to Sacramento,”  said Sacramento Councilman Steve Hansen (@Steve4Sac). More from The Sacramento Bee.

.@HRC is proud to partner with @BermudaPride1 and @OUTBermuda to celebrate #Pride2019 in Bermuda #WeBelong ��️‍�� ���� https://t.co/sovMhLfT3k

READING RAINBOW – Bookmark now to read on your lunch break!

Out shares beautiful photos from a same-sex Indian-Pakistani wedding

Have news? Send us your news and tips at .(JavaScript must be enabled to view this email address). Click here to subscribe to #AM_Equality and follow @HRC for all the latest news. Thanks for reading!

Like Loading...
Suit Against Pharmacy Groups Uses Antitrust as a Weapon Against Unaccountable Online Censorship Study: Renewables Pay for Themselves in Health Benefits